During the 1800s, the idealized role for women was that of the housewife. Women were expected to marry, manage the household chores, and raise the children. Unmarried women could work as teachers until they married; if they never married, they frequently took on the responsibility of caring for unmarried brothers and aging parents. In poor families, women left home to work as servants or in factories.

In farming communities like Cornwall, women’s work extended outside the home. While prosperous merchants and professionals could afford the luxury of wives who did not work, most families needed an extra pair of hands on the farm.

Beginning during the 1870s, thanks in part to new technologies, and in part to changing attitudes about women, there was a rapid increase in the number of middle class women working outside the home. 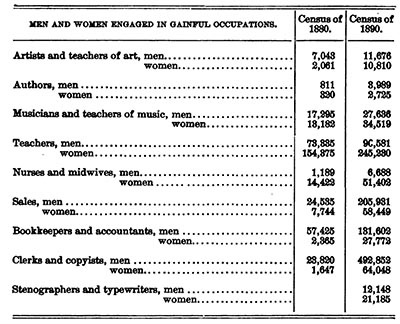 Occupational data published in “The Matrimonial Market,” by Edward Cary in The Forum, 1896. The author noted that one out of every twenty women had jobs. He concluded that “it is becoming clearly easier for the average woman in the United States to earn her livelihood without marriage—if she so choose.” 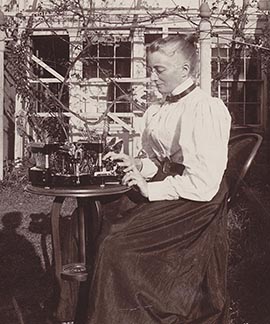 Mary Ellen Bradford demonstrating what appears to be either a typewriter or a stenograph machine, 1898.
(Collection of Cornwall Historical Society)

New York’s YWCA began offering the first typing classes for women in 1881. Within five years, there were 60,000 women working as typists throughout the country.

A few women have gone into court reporting, but the work is too exhausting as a rule. For the same reason women cannot be much used by newspapers for reporting meetings. Too much of the work is done late at night and under conditions that would soon break any woman down. Few men are able to stand the strain more than ten or fifteen years.

…to-day there are many women court stenographers all over the United States, who, I am told, are preferred to men on account of their painstaking care, accuracy and habits.

…a man can do more things in an office than a woman can. He can be sent out to attend to things and be called on for different little offices when he has nothing else to do, which a man would not ask a woman to do. And that is probably the reason of the difference in salary of the two.

Women get less than men for the same work. It is an injustice. But the reason is one of supply and demand. There are plenty of women ready to take these positions at the price that is paid. Everybody was glad when typewriting opened a larger field for women who support themselves. But the field is very full and they are glad to come for the prices that are given.

The first telephone exchanges, where calls were connected, were staffed by boys. This soon proved to be “bedlam,” as one exchange owner noted. Young women soon replaced boys as telephone operators, excelling so much at the job that it was taken for granted that all operators would be women. 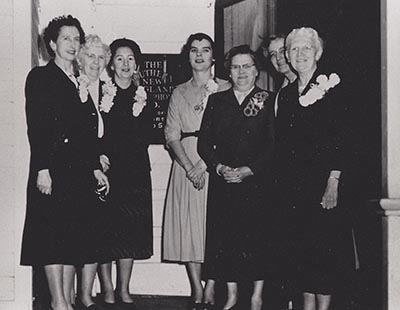 Nursing as a career for women is usually associated with Florence Nightingale, who published “Notes on Nursing” in 1859. She opened a training school for nurses in England the following year, becoming an advocate for women to pursue careers in nursing.

The first professional nurse training programs in the U.S., based on Nightingale’s principals, were established in 1873 in New Haven, Boston, and New York. By 1900, there were hundreds of nursing schools in operation.

Until the 1870s, librarians were almost exclusively men. Women entered the field as assistants, quickly proving that they were highly capable as librarians. As with many professions, only single women were considered suitable for the job. Marriage was grounds for dismissal.

The American woman librarian has done much to endear the library to the populace, and a great deal of the popularity of the American libraries is due to her faithfulness, conscientiousness, genius, and patience. 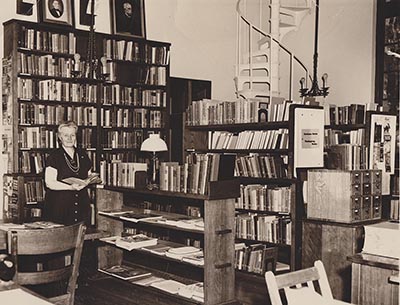 Emily Marsh, 1953. Marsh was the town’s librarian from 1920 until 1963.
(Collection of Cornwall Historical Society)

Cornwall Women of this Era