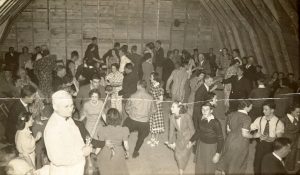 We went to the neighborhood Sunday night sings in the long front room  of the [Scoville] farmhouse. When we were all seated, with Mrs. Hedden at the piano, the well-worn 1886 Gospel Hymns were passed around. People all over the room, children and all, called the numbers of the hymns they wanted. My brother, who sang joyfully under cover of the men’s voices, called every single week for “Hold the Fort, for I am Coming.” and “Pull for the Shore, Sailor! Pull for the Shore!” The men gave these their all and how they did sing out! They might have been heard a mile away. And must have ripped to rags everyone’s tensions for the whole next week. – Harriet Soule 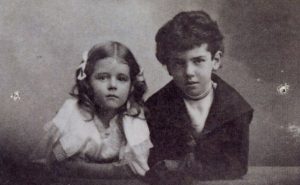 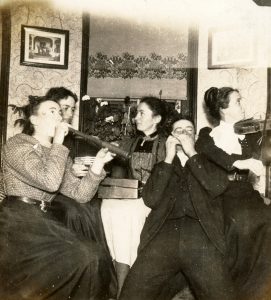 This photo of music-making in the Harrison Kitchen was taken around 1900 by “flashlight.” 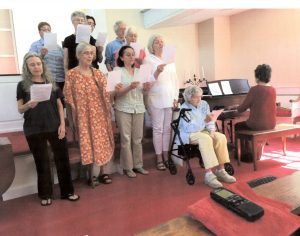 The UCC choir performs the same hymns sung in the Scoville farm house more than a century before.