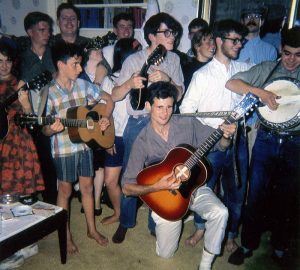 When I was a kid growing up in Cornwall, there was a lot of homemade music. Eddie Lisk’s band played at the Grange Hall. Tood Tanguay played fiddle for barn dances in the Hart’s Barn and even in the covered bridge – sometimes playing over his head or behind his back.

The kids I grew up with like Lorraine Choiniere, now Hammond, and John Nuese got into music with a passion; both went on to become nationally known musicians. A few years ago Lorraine began coming back to Cornwall and revisiting the local musicians she had known and learned from as a child. She and her husband Bennett Hammond began a series of free Cornwall homecoming concerts. She wrote a thesis on Cornwall music, placing it in the arc of rural Appalachian music from Georgia to Maine and the Maritimes. And she began passing on the music she had learned as a child to younger musicians, notably Rachel Gall.

But in fact, homegrown music in Cornwall has persisted from generation to generation. John Nuese learned much of his guitar playing from Byron Hall. Gary Hall, talking of his uncle Byron Hall, said: Back in those days they didn’t have TV, they didn’t even have much radio. Checkers and music, that’s most of what they had. 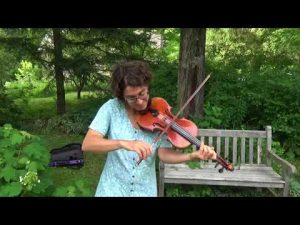 Ballads & Barn Dances: The Homegrown Music of Cornwall includes a new crop of Cornwall singers and songwriters whose work is likely to appear on the Internet as well as on a Cornwall back porch.

What we’re trying to do with the Homegrown Music of Cornwall project is to let people know about the older traditions – and the people who are reinventing those traditions today.

VIDEO: Rachel Gall playing at the opening reception of Ballads and Barn Dances (screengrab of Youtube video by Richard Griggs, 2018).